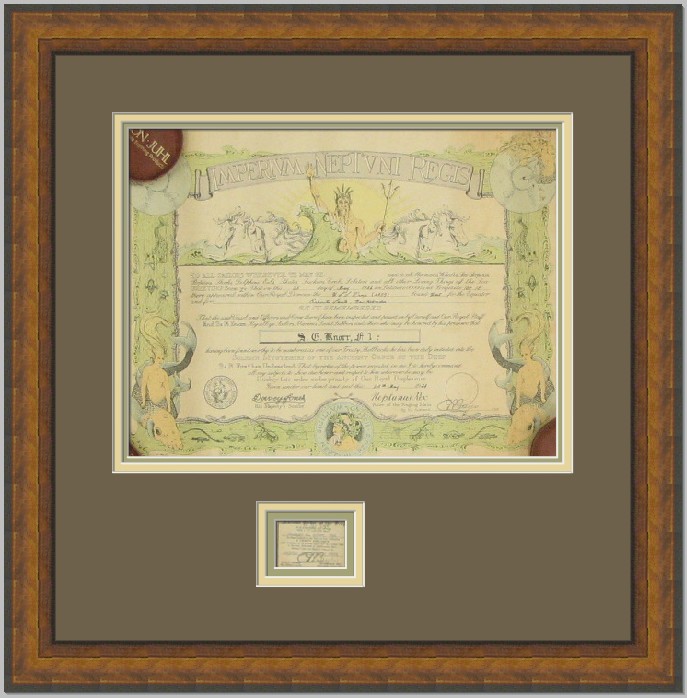 This certificate was brought in as an archival framing project because of its great importance. The ceremony of crossing the equator has been a part of Naval culture for the last 200 years or more. The certificate is given to those who served with the U.S. Navy during World War II. The large banner reading Imperium Neptuni Regis, translates to “The Empire of King Neptune.” The piece had become tattered, stained and yellowed due to its age. The customer wanted to prevent further damage from occurring. This particular customer had many pieces framed in the past. In this case, he wanted the frame to match some the other pieces. We used the golden oak frame on the outside to coordinate with his other frames. Then, we stacked an antique oak fillet on the inside of that to give it some variation and contrast. This small addition gives the piece a little more complexity and significance over the other pieces. The matting choices were simple. A dark military green was chosen for the top mat, to accent the writing. The rest of the image stands out on its own. So we actually pushed those bright colors back by using toned down versions of those colors. The yellow and sage green mats are pale compared to the green and yellows in the image. Finally, an extra mat opening was added for the authenticity certificate below the larger certificate. The top mat that borders around both images is even all the way around. This centralizes the two certificates, making them look concomitant.